On the 15th of January 2020 we released our latest game Maze Machina. Together with Max Fiedler and Oliver Salkic, same team that worked on Card Crawl and Card Thief, we were able to create the game in about 1 year of part time work. The game was released simultaneously on iOS as a Premium game ($1.99) and on Android as a „Free to Try“ version, which is supported through Ads and offers a permanent full game unlock ($1.99). 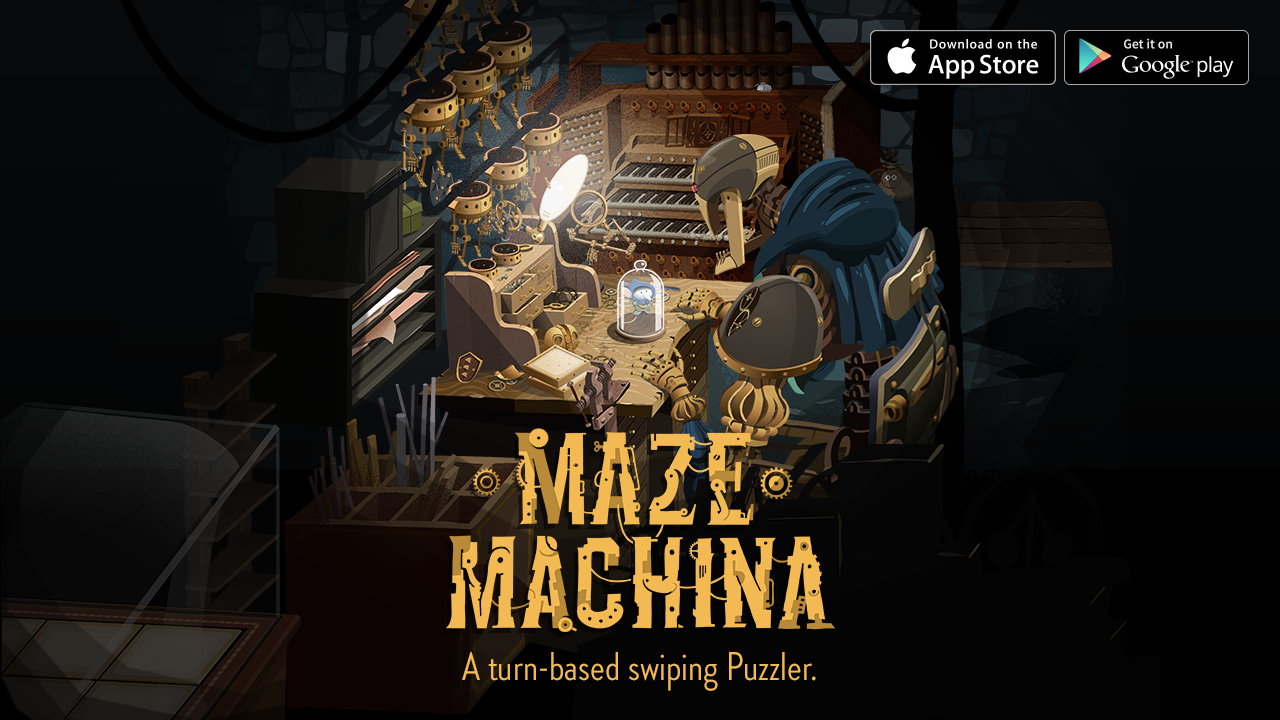 It’s been quite some time since I released my last game Miracle Merchant back in August 2017. Right after that Apple introduced the new App Store design which fundamentally changed the way (new) Games and Apps are promoted in the store. While the today tab now has a lot more editorial finesse, Games and Apps are split into their own categories. All through out the last 2 years I heard a lot of horror stories from known mobile devs that the new App Store design drastically lowered the potential of any featuring. On the iPhone only the top 3 games of each sub category are visible without horizontal scrolling and to get the new games list it can take you multiple rows of other featured content. The big banners also not seem to be as prominent as they used to be. 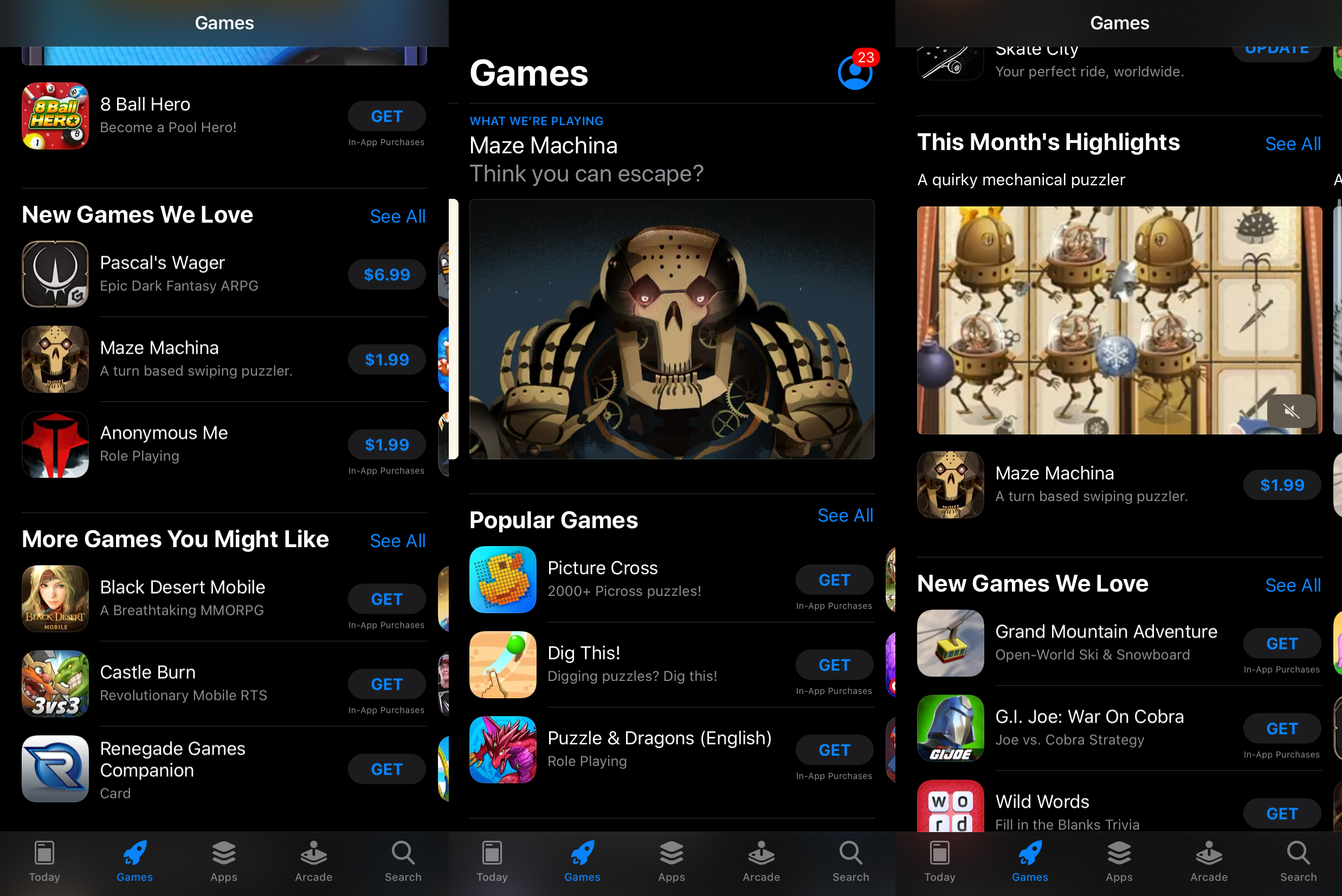 In the first week we could secure the #2 featuring spot in the new games list US behind Pascal’s Wager. I think it was good for us that both #1 and #3 had quite dull icons so that the Automatron’s face could gather quite a bit of attention. After the first week I was really surprised that we got a cool and unusual second week featuring. In addition to a top banner (last spot, so not visible) we got a This Month’s Highlights featuring that prominently showed an autoplaying App Store Preview video of our game. This type of featuring was actually way better than only the icon and that’s why I wanted to postpone my post to the second week, since after the featuring we could gain quite some ranks after already falling. Here’s the rank graph:

In the US Store Maze Machina peaked at #82 Overall, #49 Games, #3 Puzzle and #19 in Strategy. In comparisons Miracle Merchant (Released Aug 2017) peaked at #11 Overall, #9 Games, #2 Cards and #1 in Board Games. I know that it is hard to compare these titles but it is a good indicator of how the App Store landscape has changed in the past 2 years. In Germany or second best Store traditionally we could reach #18 Overall, #5 Games, #1 Puzzle, #3 Strategy.

On Android we could not get any Featuring so far, but I got contacted by their team and within the next 2 weeks something might come up. So I might add numbers from that here later as an update.

Maze Machina got quite a few good reviews and a lot of people told me that they like the Threes/Imbroglio Mashup we created. Thanks to AppUnwrapper, 148Apps, App-S, AppGefahren, Stuff.tv, Stately Play, Pocket Tactics and Touch Arcade for a lot of good critic and press coverage.

On the App Store we could gain 4.5 and on Google Play 4.3 stars. We got quite a few nice reviews all praising the games intricate design, outstanding visuals and very cool sound and music.

Before we come to the sales numbers I would like to do a little thought experiement. Since I got asked on twitter if I could estimate the development budget for Maze Machina, I promised to somewhat guess it. I do not track my time. I’m in the very unique position where I do not have to do it, because I’m self funded and I’m not bound to any external obligations to do so. I tried to track my time in the past, but it only showed me that I’m too slow and inefficient. That’s why I mainly don’t do it anymore since it is just another stress factor and if we are honest, everybody knows that in game development any estimation on how long something should take is mostly wrong anyways.

*Update: My initial estimates where a bit off. 😅

Based on a few data points, Backups, Trello logs and Email communication with my team etc. I estimated that I spend about 1 Year of part time work on the project which amounts to about 900h. Let’s add a bit more to that and say 1000h. Max estimated about 850h and Oliver another 300h. Let’s assume it took us 2150h. Based on that I would estimated that on the low end we would have an hourly wage of $35 and on the high end $120 per hour based on the tasks (Programming, Design, Art, Music, Sound). On average we should have gotten $75 per hour which would lead us to a budget of $161250. Again, this is not based on facts but a super rough estimate and I highly doubt we would have gotten that much funding for Maze Machina if we would have pitched it.

Without sounding overly negative here I think that despite its good critical reception and its top featuring the game could only make 35% of the money my last release made in its first weeks. Again it’s hard to find particular reasons why some games sell and others don’t, but I seriously think that selling Premium Mobile games as a small developer (even a super established one) has become really really fucking hard. The market has changed dramatically in the last 2 years and with all the new changes in how games are monetized, consumed and played I think that it is probably time for me to finally break out of my old habits and find new ways to sell my games.

Maze Machina was a super interesting project to work on and from the beginning I treated it as a test to see what releasing a mobile game in todays market is like. I think that most of my fanbase liked the game for what it is and that I could learn a ton from making it. For my next game I really have to change some of the fundamentals of how I will sell it, but for now I will maybe do a few more small updates on Maze Machina while I prototype new stuff. Thanks to everyone who liked, share and bought the game so far! Be sure to check out my Twitter, our Discord or my Newsletter, to get infos on what we are working on next. 🤓